This post will showcase a VERY cool formula trick that will perform a lookup operation and return multiple match results from non-adjacent columns based on any logic you need in your analysis.

We will also show how you can return unique values from non-adjacent columns.

We will achieve this with a single formula that capitalizes on the SPILL feature of Dynamic Array Functions.

Our first objective is to generate a list of Employee Names and Positions for any employee whose salary is greater than an amount defined in cell J2.

We want to build these results in a dynamic way.  If the salary threshold in cell J2 changes, we want our list to automatically update.

We want to ensure that newly added records to the table are seen by the lookup function, so we will turn the list of information into a proper Excel Table.  This will also make for easier to read formulas. 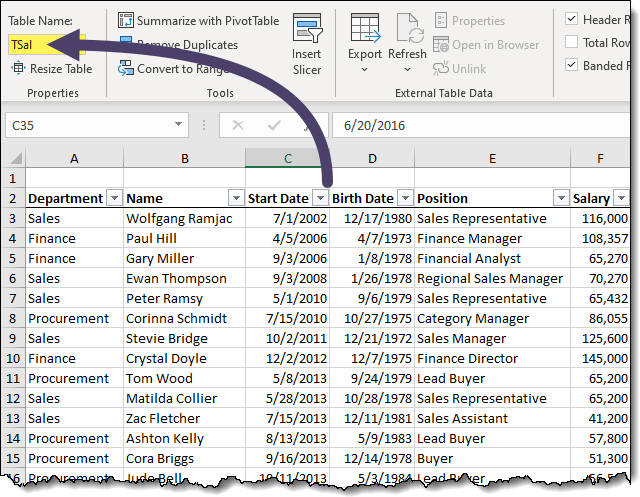 To achieve this wonderous feat of legerdemain, we will take advantage of one of the new Dynamic Array functions available to Office 365 users (sorry everyone else; I guess it’s time to upgrade) called FILTER.

If you’re not familiar with the FILTER function, click the link below for a great post and video on its use.

We’ll build this solution in stages, so we don’t have to think about too much at any single moment.

For our Range argument, we want to select the Name (column B) and Position (column E) columns in the data, but FILTER only allows for a single range.  We will have to select the columns that lie between Name and Position but ignore them in the result.

Begin by creating the beginning of the FILTER function in cell I5.

For our Include argument, we want to discover any row with a salary greater than what is defined in cell J2 (100,000).

… but we are confident we will always have at least one record returned, so we will leave that argument out of our formula for simplicity’s sake.

The formula returns the following results in a SPILL range. 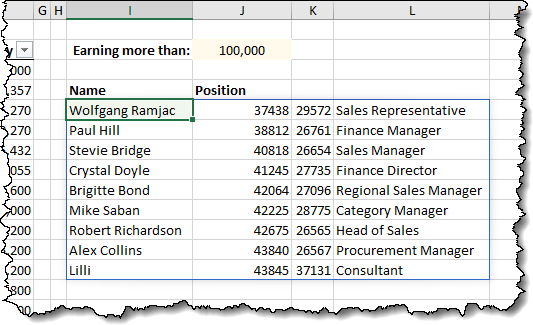 The unwanted side-effect of this result is we are including the Start Date and Birth Date columns in our filtered result. 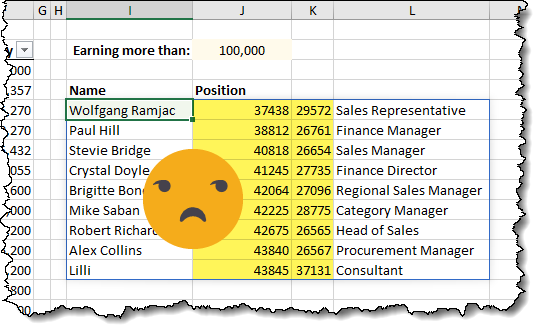 The results aren’t formatted as dates, so they look a bit strange; but trust me, they are dates.  These are the number-equivalent versions of dates.

The next step is to remove the unwanted columns from the result.

Applying a Filter to a Filter

The Include argument will use array syntax to select the 1st and 4th columns, in their entirety, from the original FILTER results.

The results are as follows. 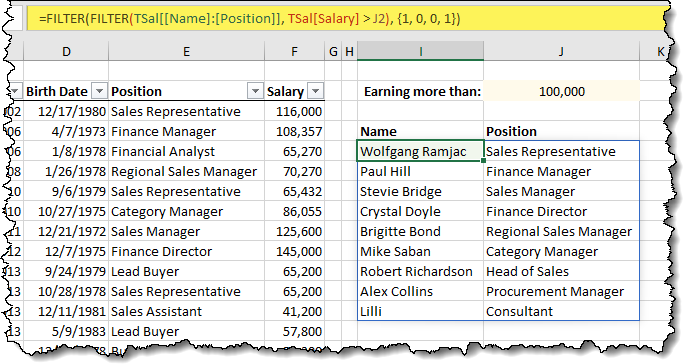 As an extra touch, we can sort the results by Name in ascending order by wrapping the FILTER/FILTER formula in a SORT function. 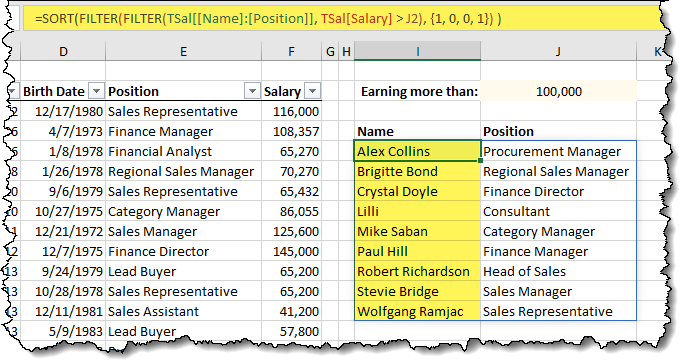 If you want to sort by Position instead of by Name, add a 2 to the [Sort_Index] argument to instruct SORT to filter by the 2nd column instead of the default 1st column. 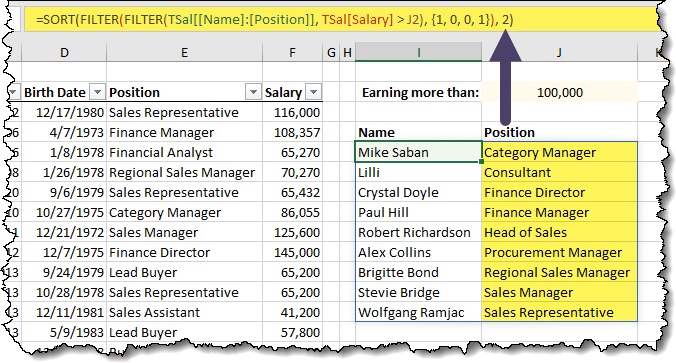 Suppose we need to generate a list of each department’s positions and we don’t want any duplicates in the result.

We can integrate the UNIQUE function while at the same time using the 1/0 trick to produce the result.

If you wanted to perform a primary sort by Department and a secondary sort by Position, you could add instructions to the [sort_index] argument to sort by the 1st column, then by the 2nd column. 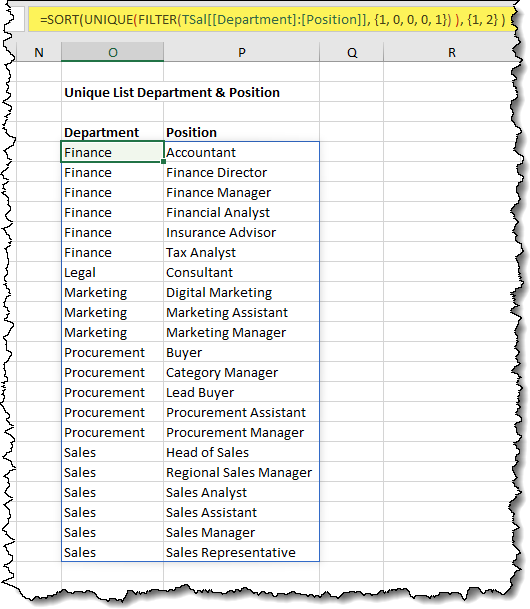 Testing the Dynamic Nature of the Solution

To ensure our result will operate properly under real-world conditions, perform the following tests:

Returning to the list of Names and Positions we generated earlier; suppose we wanted to sort the list in descending order by Salary.

Since there’s no Salary information in the result, this seems like an impossible task.

A very clever trick is to rearrange the nesting order of the functions to apply actions in a different sequence.

Let’s break it down.

We begin by selecting the columns of data from Name to Salary.

Next, we filter the rows to only include those with salaries greater than the value defined in cell J2.

Here’s the magic ingredient: we take the results as they stand now, a table that includes salaries, and we apply a SORT function to the 5th column (Salary) and apply a descending sort (-1).

With the newly sorted table, we use our previously discovered 1/0 trick to keep the 1st and 4th columns (Name & Position) while filtering out the remaining columns. 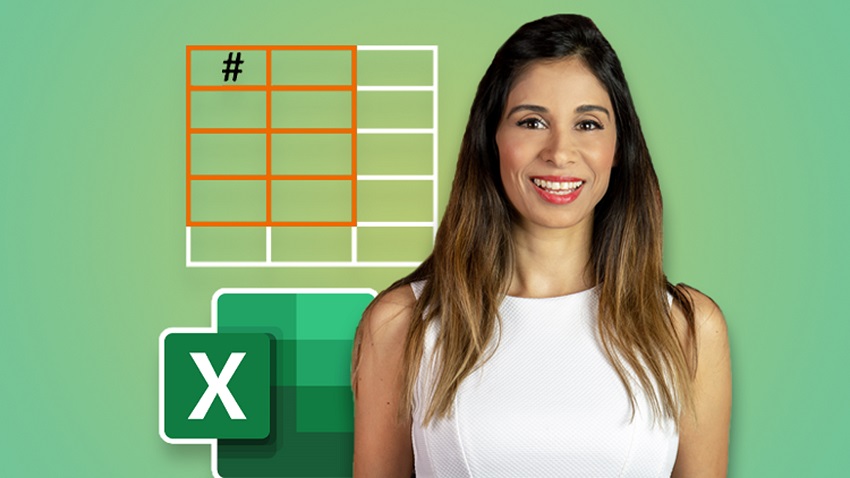