Custom formatting is also faster to implement – even if you want to build in thresholds.

In this guide, I’m going to show you four examples where you can use custom formatting instead of conditional formatting, starting with a simple way of showing variances using symbols – up/down arrows or any symbol of your choice.

Any Symbol of your choice for Deviations 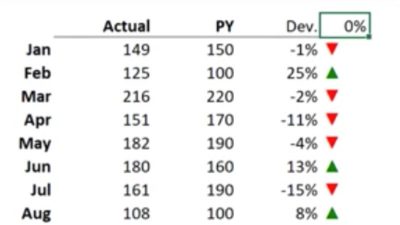 Custom formatting is really easy to use when you understand the rule behind it. Once it clicks, you see all the opportunities to improve the presentation of your reports.

To access Custom Formatting, right-click on any cell, click Format Cells…, and in the window that appears, in the Number tab, go to Custom.

The main logic is this – there are 4 arguments – separated by ; – defining how the following elements should be formatted:

In this case, we will just focus on the first three arguments, and ignore text. 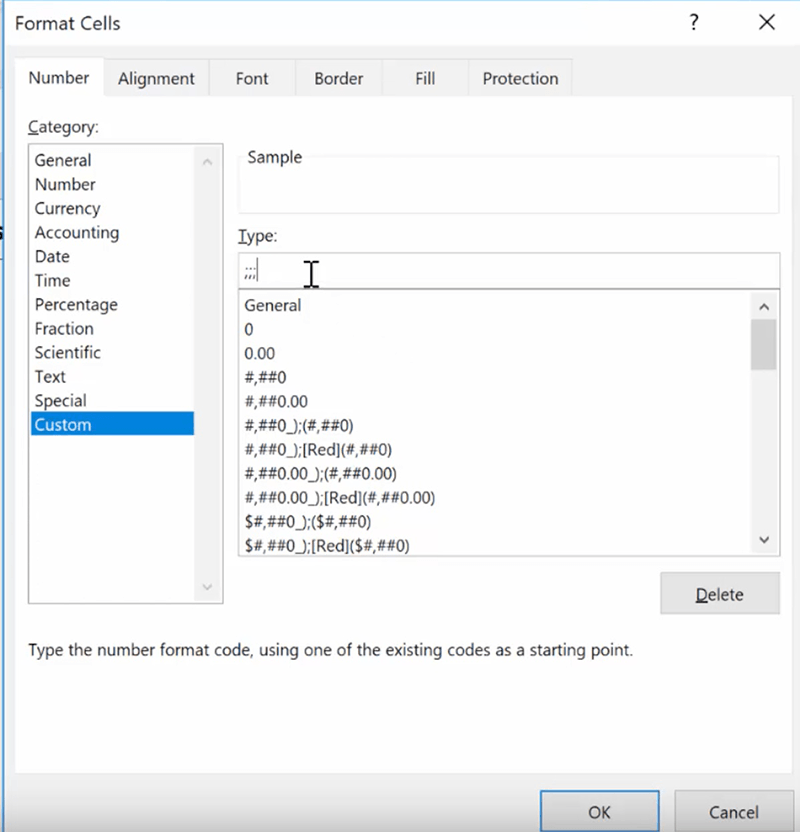 The hashtag (#) sign and the 0 sign are basically just placeholders for numbers. The only difference is the hashtag sign is a variable placeholder and 0 is a fixed placeholder.

As an example, let’s say we want a show any positive number that is typed in, shown as ‘plus’ and then a number. The first argument should be as follows:

Negative numbers should be shown in brackets.

Next, how zero values should be formatted.

Zero values will be hidden. 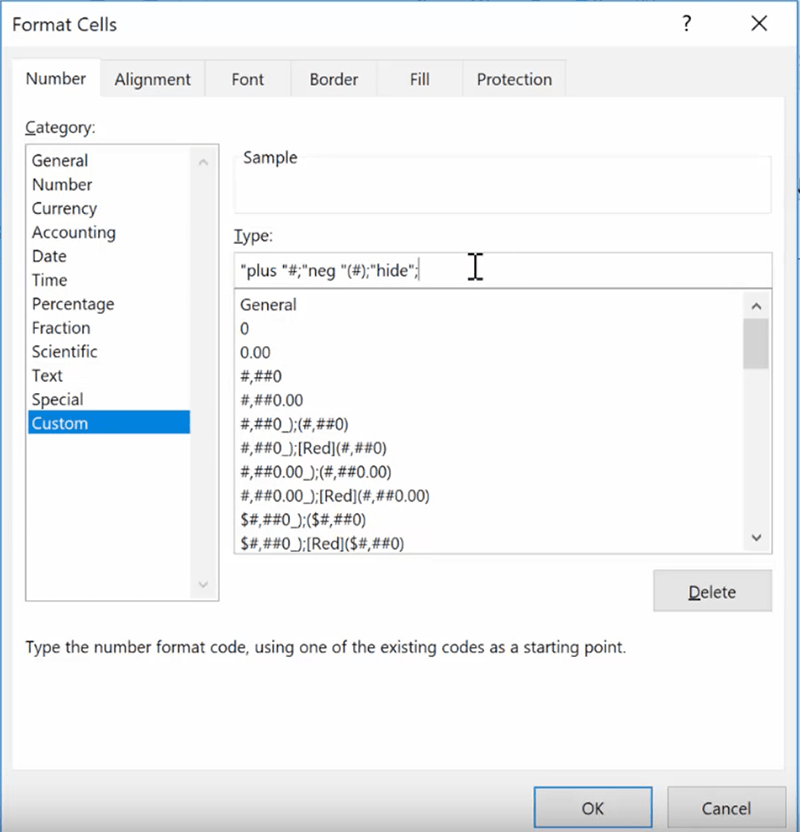 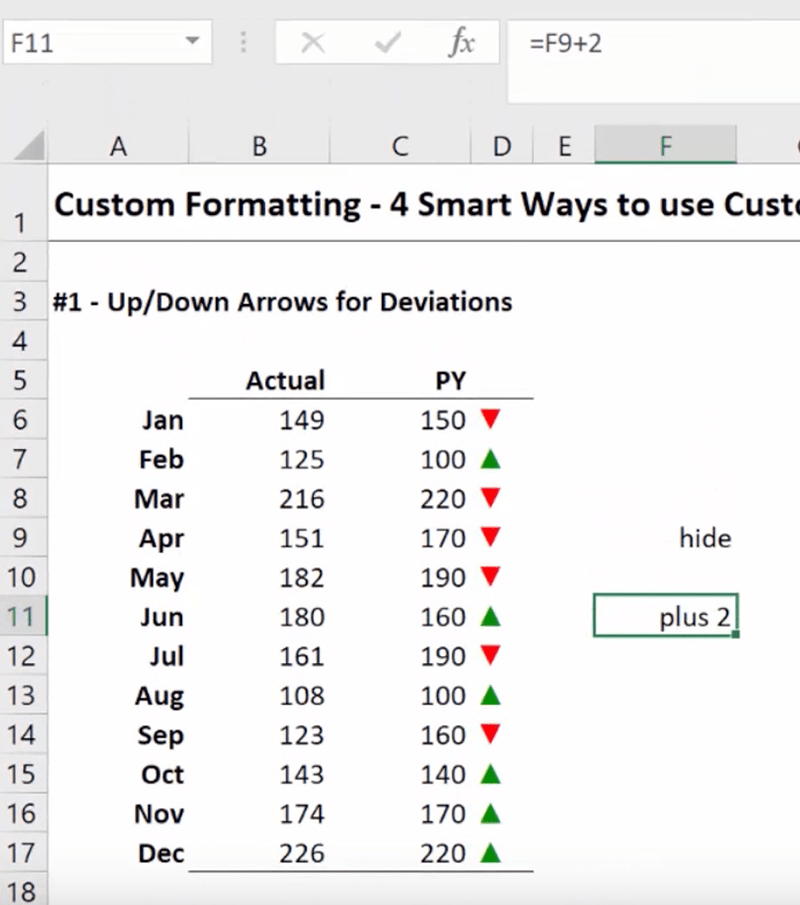 Press Ctrl-1, and edit the arguments to say this:

Now, even though the cell value is 0, it’s not showing anything.

NOTE: If you want to add color, they should be added to arguments in this way:

To add up and down arrows, go to Insert > Symbol.

Insert the Down and Up Arrow out of the way in an unused cell. You will use them later for custom formatting.

Essentially, Custom Formatting is about making numbers appear as whatever you want.

This is why it works incredibly well for showing deviations.

To start, you need numbers, so do the calculation: Actual – PY.

Select Cells D6-D17 – where you want to apply the custom formatting – and press Ctrl-1.

Go to Custom, and in General, for the first argument – how positive numbers are formatted – paste the arrow symbols.

Positive values will appear as ▲, negative as ▼, and zero values as nothing.

Press OK, and the values will appear as arrow symbols. 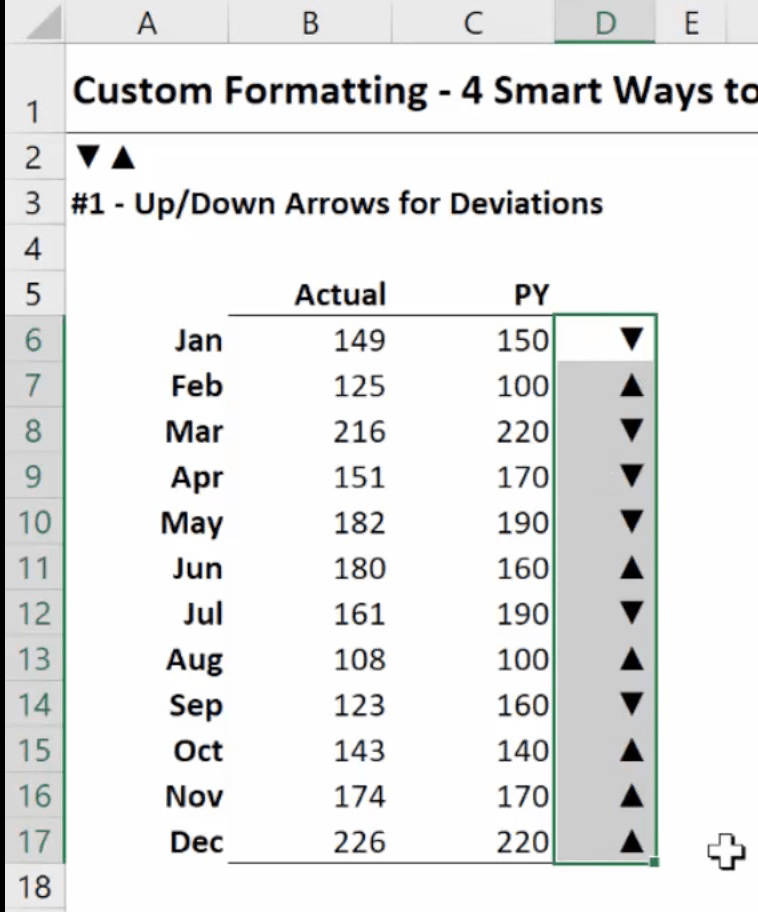 With the values selected, press Ctrl-1, and edit the arguments to say this:

Excel’s colors are language-sensitive, so you’ll have to translate [green], [red], etc. to your language.

Press OK, and the arrows now appear like this: 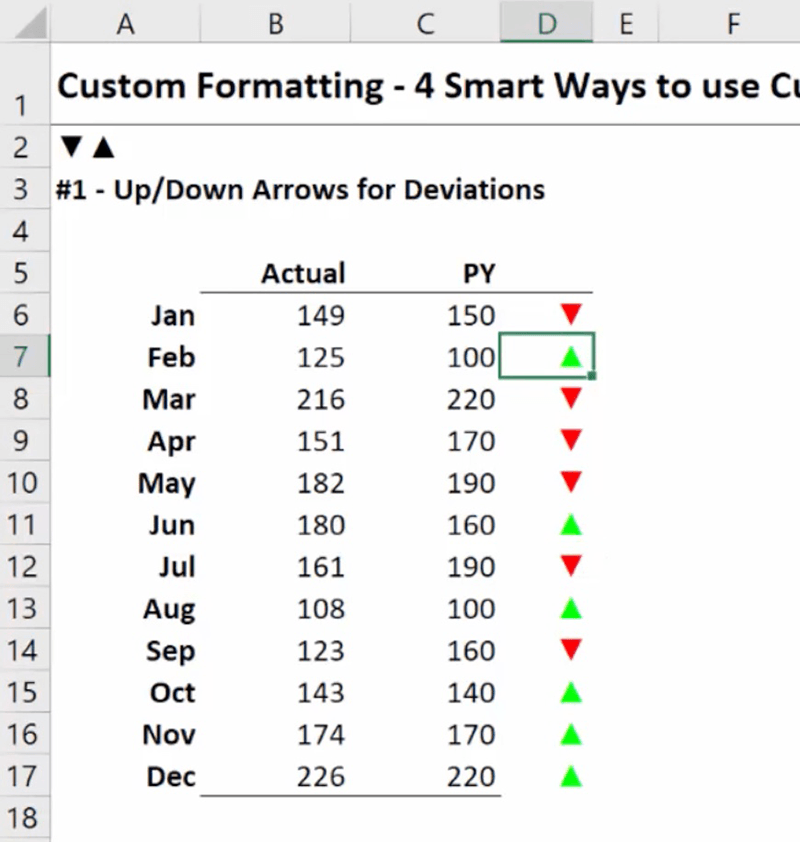 However, I find the green used here too bright.

The colors available are listed here. 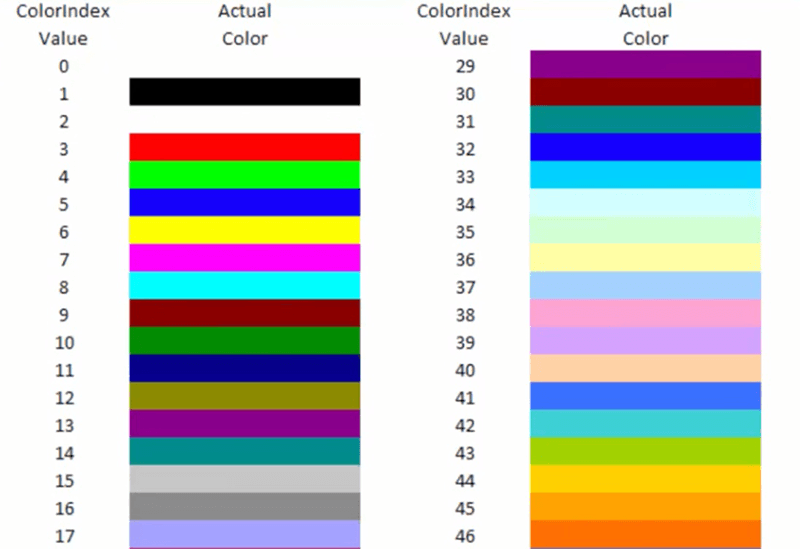 Edit the arguments to say:

The positive arrows have now changed to the new green.

In addition to showing the deviation as arrows (as in the previous chapter), now we’re going to show percentages too.

To get the percentages, use Actual divided by PY:

Format this as a Percentage. Drag L6 down to L17.

While they are highlighted, press Ctrl-1.

Edit the arguments to say this:

Now we have deviations shown as arrows and percentages.

Edit the arguments, inserting two spaces before each arrow symbol.

This has added two spaces between% and the arrow symbol.

However, if you want this space to expand as you increase the width of the cell, edit the arguments to say this:

We’ve added a *, followed by a space.

The *, or asterisk, is syntax to repeat whatever follows it until it reaches the edge of the cell.

So this *, followed by a space, repeats the space as the cell’s width increases, so the breathing space is proportional to the width of the cell. 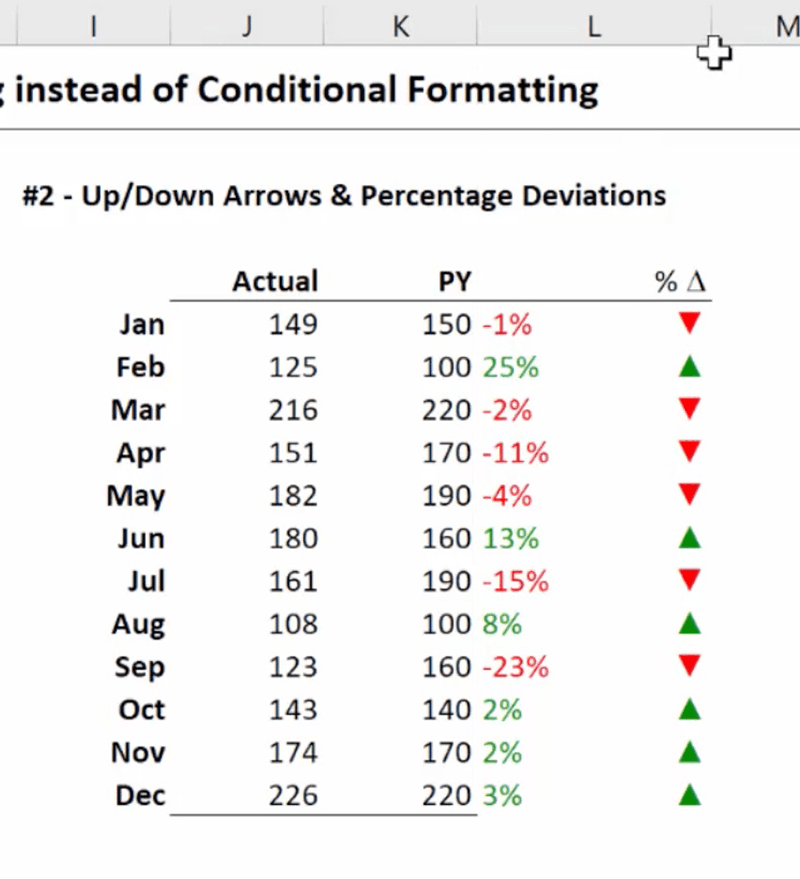 Watch these two examples being built in the video below, as well as the introduction to the basics of custom formatting. 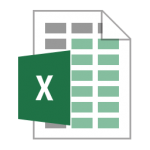 Next in Part 2 of this guide, I will show you how to use any symbol of your choice for deviations, and up/down arrows for higher variances.

Check out THIS ARTICLE form Michael. He goes in a lot more detail on how custom formatting works. Make sure you download the file at the bottom of the post.

In addition the VIDEO for THIS ARTICLE takes you through specific scenarios on how you can apply custom formatting to your Excel Reports. 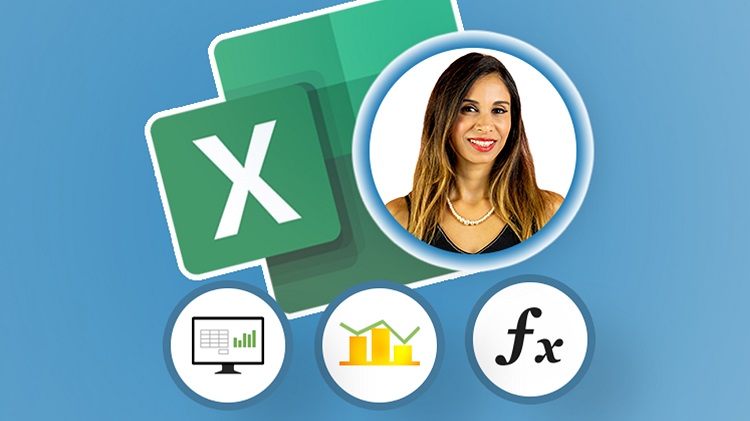